Elmo was born 2 September 1915 to Robert Lee and Mollie Guthrie on a farm 1 mile east and 1 ¾ miles north of Burns Flat.  He was the seventh child in a family of 9 children.  His dad was a farmer.  Elmo attended school at North Burns, south of Burns Flat, then for 7 years he attended Burns Flat High School where he graduated in 1934.  He loved sports and played basketball throughout high school.  He attended the Cumberland Presbyterian Church when it was only a basement. 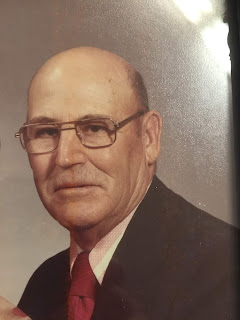 Bernice was born 12 December 1916 to Lewis and Iva Opal Dippel on farm near Foss Lake.  She was the first child in a family of 5 children.  Her father was a farmer and a service station operator.  Bernice attended school at Stafford and then High School at Foss, graduating in 1933.  She played main string guard on the Foss basketball team.  She attended the Foss Baptist Church.  In the spring of 1933, a group of Foss and Burns Flat kids had a weenie roast.  That’s where Elmo and Bernice became acquainted.  Elmo didn’t have the nerve to ask her for a date.  She might turn him down.  He had a mutual friend call and get him a date for Saturday night.  You’ve heard of Love at First Sight, this was love after the first date as they never dated anyone else.  According to Elmo, that was his downfall.

Elmo started college in the fall of 1934 at Southwestern Oklahoma State University.  Bernice was a telephone operator at Foss.  They were married on 28 December 1935 at Bernice’s home in Stafford.  The service was conducted by Bernice’s uncle, a Baptist minister.  The first 6 months of marriage, Bernice stayed in Foss with her family.  Her mother had died, and her dad needed help with 4 younger children.  Elmo was in school at Weatherford and continued his education.  Jobs were hard to come by at that time.  He would hitch a ride to Foss every weekend as he didn’t have a car.  One of his family would take him back.  Later that year, both Elmo and Bernice moved to Weatherford.  During the summer, Elmo worked any job he could find. 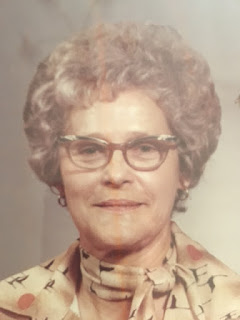 Elmo started teaching before he graduated as was the custom in those days.  He graduated in 1940 with a BA in History, Math, and Economics.  His first school was near Bessie which later became a residence for a teacher.  Elmo taught in 5 schools, with Foss and Burns Flat being the last two.

Elmo was a high school principal and superintendent at Foss.  He served 5 years as a teacher, coach, and principal in the Burns Flat Schools, and served 20 years on the Burns Flat Board of Education.  He left teaching in 1953 to devote his time to farming and the dairy business.  Elmo and Bernice ran a dairy for 23 years.

Bernice was a housewife and a helpmate with the farming and dairy, besides being a full-time mother to 4 sons and 3 daughters.

Elmo served the Lord in the church for 67 years.  He was ordained as an elder in the Cumberland Presbyterian Church in 1954 and served as session clerk for 26 years.  Bernice joined the church in 1944.  Both were Sunday school teachers.  Bernice played the piano for many years.  They lived out their years on the family farm.  Their 7 children all married and gave them 13 grandchildren and 8 great-grandchild.
Posted by Tom Spence at 10:56 AM