You are the light of the world. A town built on a hill cannot be hidden. Neither do people light a lamp and put it under a bowl. Instead they put it on its stand, and it gives light to everyone in the house. In the same way, let your light shine before others, that they may see your good deeds and glorify your Father in heaven.    Matthew 5:14-16 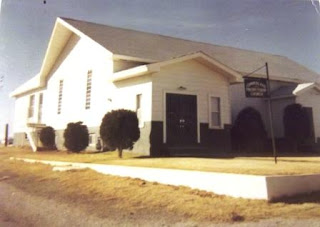 History is the recording of past events and experiences.  This history was originally compiled by Elmo Guthrie in the early 1990's.  While there may be a few gaps in this history and some accounts less precise than desired, the story it tells is clearly one of faithfulness.  This is a church with humble beginnings that grew to its present size based on faith alone and one that believes that we are just getting started to do God's work in our community and beyond.
The Boggy Cumberland Presbyterian Church was organized August 13th, 1899.  Beginning with only 13 members and a supply pastor, Reverend T. S. Cosey, the church met in the Boggy Schoolhouse, which at that time was a half-dugout.  Cosey left the church two months after it was started and Reverend J. L. Joyner, a local farmer, became the church's second pastor.  His starting salary was $82.50 per year.  After a few years, the church met in a school building two and one-half miles east of Burns Flat.
Reverend Joyner served through 1911 and the following year the church was without a pastor but added 23 new members following a revival.  Reverend M.C. McCullough and Reverend B. P. Butler served as pastor in 1915.  There is no record that the church had a pastor from 1916 through 1922.  Reverend M. C. Scrudder served the church from 1923-1924.  Reverend Elmer Kelly then served as pastor from 1925 through 1949.
In March 1929, the Boggy, Novice, and North Burns School Districts consolidated and began building a school in Burns Flat.  The Boggy Cumberland Church found themselves without a meeting place and purchased one acre of land near the present day high school.  In six weeks, the church had completed a 34' X 40' basement, furnished it with pews, and began services in the new location.  This project began with only $20 in the treasury.
Following a revival in late September 1930, the church decided to erect a church building over the basement.  Lumber was ordered on October 1st, 1930 and six weeks later the building was completed all through donated labor from the Methodist, Baptist, Church of Christ, Catholic, and Presbyterian churches.  Reverend Kelly reported as many as 38 men and boys from these churches gave their labor and the sanctuary was completed with only $400 of debt.

In the 1940's, the church purchased a manse near the church.  This manse was sold in 1977 and another property was purchased.  In early 1949, the church began an expansion project of both the basement and sanctuary.  The project began with only $100 in the treasury and the cost of building and seating above the donated labor was $1,776 which was paid for by year's end.
The following ministers served the church after 1949:  W. R. Reid, D. G. Francis, J. C. Willet, C. A. Thompson, Houston Dixon, Fed Canada, Jack Freeman, Gerald Thomas, Melvin Orr, Courtney Fooks, Kermit Neal, Kenneth Williams, Sam Pinnell, and Walter Russell who began his service with our church in 1986.
During Reverend Freeman's ministry, which began in 1958, the church saw a need for more room because of the growth aboard the base.  February's Sunday School attendance was 44, but by May it had grown to 89.  The church decided to build a 2400 square foot educational unit on the west side of the church.  As usual, the church had no money, but a building fund drive raised $2,100 and a $4,000 bank loan were enough to begin work.  The church addition was finished in September of that same year and the loan paid off shortly thereafter.  A revival and dedication service was conducted by Reverend Loyce S. Estes to commemorate the event.
Many men and women have served the church since its beginning.  Beauna Brown was elected church treasurer in 1927 for an indefinite term.  Matt Warren served as a treasurer from the late 1930's until 1941 when W. M. Sullivan was elected and subsequently served 24 years.  In October1966, Junior Delp succeeded Sullivan and is our current treasurer.
Church clerks were G. B. Joyner, Mrs. Luna Haws (substitute), Beauna Brown (1927-1954), Virgil Dawson (temporary), Elmo Guthrie (1954-1981), and Gene Reeves (1981 to present).
In the 1980's, the front entrance and steps were constructed.  Beneath these concrete steps lie the original steps to the Boggy School where the church first met.  In the 1990's, the church considered a new building program but opted for remodeling of the church to include a ramp and rails on the north entrance to the building and remodeling of the basement and educational unit.  The church borrowed $20,000 for the project and quickly repaid the loan.  A dedication of the work and open house was held on 22 March 1992.

By 1999, the church again experienced growth and arrived in a new century considering its options for expansion.  Our pastor was Jim Fisk.  The first area of growth addressed was in the area of supporting our ministries with the purchase of a church van.  A $10,000 loan was taken from the bank and repaid 8 months later.  The van has been instrumental in supporting our youth and in other church activities.  In the summer of 2000, the van hauled members of our church and the Living Waters, Assembly of God church on a home-building mission to Mexico.  The fundraising for this trip was supported by the entire community.